“Have you both graduated already, Ojou-san[1]He’s takling about Luca and Elsa?”

This was earnestly said to Elsa when she came to check on her new spectacles at the shop.

“I was already in my third year when I met you though Mr. Shop Owner.”

The shop owner, who she’d gotten close with, said as Elsa adjusted her new frames.

“The spectacles have completely become a part of you, Elsa Ojou-chan.”

“Luca said that the spectacles are my body.”

“…… I thought this before but, Ojou-san, shouldn’t you scold him?”

“I thought about it.”

But, he was that kind of guy so she gave up.

“I’m glad. Then, what will you do now that you’ve graduated, Ojou-san? Will you marry the lad?”

The shop owner replied in a shocked tone and sighed. Elsa frowned, “What do you mean?” The shop owner ended the conversation, “Think about it yourself”.

“…… After graduating, I will remain at this university to continue my research, so I’ll come again.”

“It’s not a problem because my parents have already given up on me.”

It was mainly because she was eccentric and no one could keep her from walking her own path in life.

“He will become a court bureaucrat.”

He didn’t know where he would be assigned to yet, but he was smart so he would be able to easily pass the test to become a bureaucrat.

“…… There’s nothing wrong with his brains but would he be alright? That airhead.”

Luca working at the court filled her with anxiety, but it would probably turn out fine somehow. Probably……

“Will you carry on as you have been, Ojou-chan?”

“Yes. Well, I would be continuing my research while assisting the other professors.”

Elsa paid the shop owner and adjusted her glasses in a familiar guesture.

“Yes. Give my regards to the lad.”

Elsa swung her spring coat and put it on like a man, then she gently stuck her arms out. She looked up at the blue sky and stretched. She felt something profound when she thought about how her graduation was approaching. Elsa, however, was staying at the university so nothing would change after all.

But there were some things that would definitely change. Luca, who had always been by her side, wouldn’t be there anymore. He would be working in court so he would be moving to the Royal Capital. Fillure University was next to the Royal Capital, Zola but it was still quite a distance away.

She sighed and began to walk. Let’s eat something sweet to change my mood before returning.

I feel somewhat sad. I wonder why? Is it because the life I’ve lived for four years is changing? However, she had spent a longer time in primary school and high school but for some reason she felt stranger than when it had ended.

She sat at the café that had become her favourite place in these past four years and pondered about what was different from this time and then while eating a semifreddo. She ate the sweet semifreddo while sipping on bitter coffee. Yeah, it’s delicious. 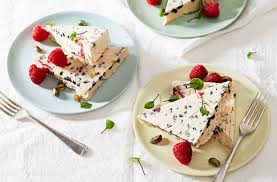 She was graduating but she was going to be a researcher, so she would probably still be at this university. But, Luca, who had always kept her company, wouldn’t be here anymore. So, they probably wouldn’t be coming here together anymore. No, they might but it wouldn’t be as frequent as they were now.

She was obviously grieving. Elsa, who had finished eating the semifreddo, raised her hand and ordered something else.

“Excuse me, can I have a panna cotta and cappuccino, please.”

“You eat really well. Will you still have appetite for dinner?”

The voice that called out to Elsa had come from the terrace, it was Luca. She had thought this before but he knew where she was, didn’t he?

“I thought about eating the dolce from here.”

It seemed that he’d just happened to pass by. They had known each other for nearly two decades so their behaviour also resembled each other’s.

Luca, who had said that, cheekily sat opposite of Elsa and order a bicerin. It was a warm drink mixed with espresso, hot chocolate and milk. Elsa acknowledged it as a drink under the dolce category and that it was an extremely girly drink. Luca’s girl power was high. He had ordered something cute.

Elsa scooped up the panna cotta with her spoon while Luca was sipping his drink. She stared at Luca.

“…… I was just feeling sentimental over the fact that we would be parting ways soon.”

Elsa said nonchalantly. If she knew her feelings then she would have grasped them. This feeling was similar to the time when her younger and older sisters had gotten married. The feeling of separating from someone important.

This time, Elsa frowned because she felt Luca staring at her. He laughed abruptly and shook his head, “We won’t”. Their reactions were similar.

“I thought that you would lose your charm after you had entered university but you just said such a charming thing.”

“You, don’t you think you should apologies to me at least once?”

She felt like he’d said something horrible. Luca said flabbergasted, “Why?” He really is no good.

Luca said as he gazed at the landscape he’d been seeing for the last four years.

“We certainly won’t be together the whole time and our paths may differ. But that doesn’t mean that we can’t still be together.”

Elsa sipped her cappuccino and said.

“I’ll be a little lonely, but well it feels the same as when my sisters had gotten married.”

“Do you want to get married?”

“How did you come up with that?’

Their retorts were different. Why didn’t he rebuke her when she said it was the same feeling she had with her sisters? Being off point was also a part of Luca.

“Come to think of it, we’ve known each other for a long time. Has it been 15 years?”

They had been continuously fighting over the top position since then. It wasn’t like the two loved studying so much that they couldn’t stop, they were both geniuses.

Elsa was a little more level-headed than Luca was but neither of them gave up. Elsa and Luca’s common friends said that there were many eccentrics amongst smart people.

“It’s been really long…… It does feel weird to be separated from you.”

Luca said. He was as serious as always and Elsa sighed.

“Why…… Are you getting sentimental at that milestone?”

Especially when they were graduating. Especially now when she was feeling terrible.

“Well, I could understand your feelings. Come to think of it, the social season is starting soon, won’t you come to the evening parties with me?”

Come to think of it, Luca can’t avoid the high society anymore now that he’s a court bureaucrat. He was different from Elsa, who had intended to shut herself in while researching.

She immediately replied. Elsa hadn’t attended any evening parties even though she had debuted in front of the high society. She was unsure about her mannerisms and she was arrogant so it didn’t seem like she was popular with high society.

“Do your best alone.”

Luca said as he drank his bicerin. Elsa also drank her cappuccino, then they returned to the university together.

“……. Which reminds me, the university results will be posted up soon.”

“Yeah…… Well, the top position would probably go to me or you.”

“Even till the end, that won’t change.”

“…… I’ll come see you again if you say you’re lonely because this university will become my alma mater.”

Elsa narrowed her eyes, looked up at the blue sky and then at Luca.

“I’ll be happy if you tell me that. Well, best regards.”

Luca raised his hands as if to give her a high five, but she ignored it so he rubbed her head instead. Why?

Incidentally this was what had caused Luca to frequently visit Elsa in the future.

Previous | Table of Contents | Next

Blushy
I Reincarnated as a Noble Villainess But Why Did it Turn Out Like This?
Seijo no Hazu ga, Doyara Nottoraremashita
The Reborn Little Girl Won’t Give up
Inner Palace Fragrance Princess
via Paypal: